Well, one is a commission and one was a suggestion.  Now that they have both been delivered, I can show them.

The first was a dog portrait for an old high school friend with whom I reconnected on FB.  It’s their greyhound, Marlowe.  The recipient said it gave her goosebumps when she first opened it.  Awww. 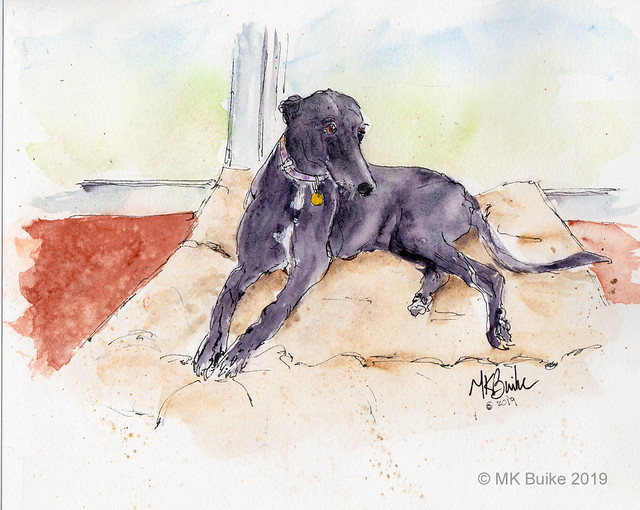 They second is Pete, one of the Museum’s docents.  He’s a 90+ y/o World War II veteran.  He is on my shift every Thursday, plus he also volunteers up at the Museum’s Restoration Center in Everett, helping to restore aircraft. And he builds large scale models for display.  One of the other docents suggested I turn a photo of him with his most recent project into a watercolor.  It took two tries to get the portrait to look like him.

It was presented to him today (12/12/19).  He was very appreciative.  The model he build is the 1910 Bleriot, first to fly across the English Channel. 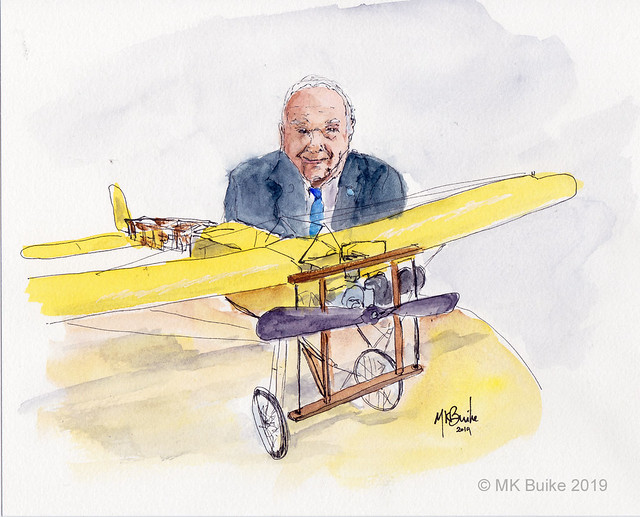 Born in Michigan. Attended undergrad and graduate universities there. I've lived in England, Germany, Southern California and now Washington (state). I'm a retired Medical Social Worker with a past specialty in Oncology. I've enjoyed exploring historical re-creation through the SCA. I costume in several fandoms. Lately I've returned to Art and have taken up Urban Sketching, a version of en plein air painting.
View all posts by redharparts →
This entry was posted in Sketches and tagged dog, greyhound, ink and wash, Museum of Flight, Pete, watercolor. Bookmark the permalink.