While waiting for a shop to open in my suburb, I stopped in at a new-ish local coffee shop, Boon Boona.  It’s East African.   I was glad to see it so full on a weekday morning. 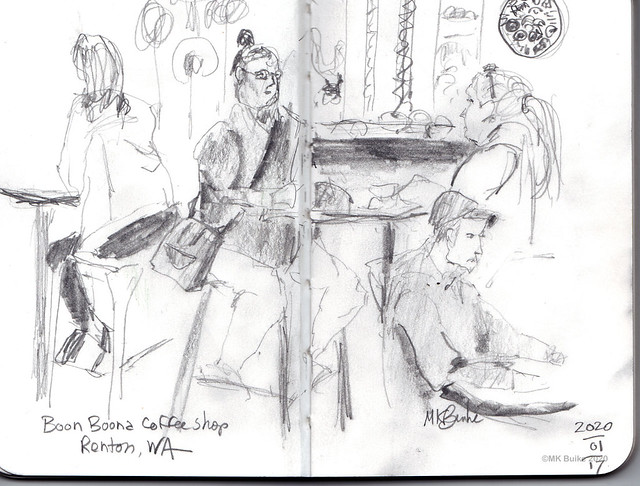 I’ve given sketching with a ball point pen the old college try.  I don’t like it.  So I decided to use pencil.  It’s a Faber-Castell B I got in Germany… it has a fancy cap that includes a sharpener. This is a Stillman & Birn pocket Epsilon.

After my errand, I drove on to the Museum of Flight for a Member’s event: “Coffee with the Curator.”  They had scheduled it into a large room and it was nearly full! Perhaps because this was our first opportunity to meet the new curator, Matthew Burchette.   This issue of the Museum’s magazine, Aloft, has an article about him.  The topics included discussion of the planned “refresh” of the World War II gallery in the Personal Courage Wing to coincide with the 75th anniversary of the end of WWII this year.  At this event there were also WWII artifacts on display from the archives. 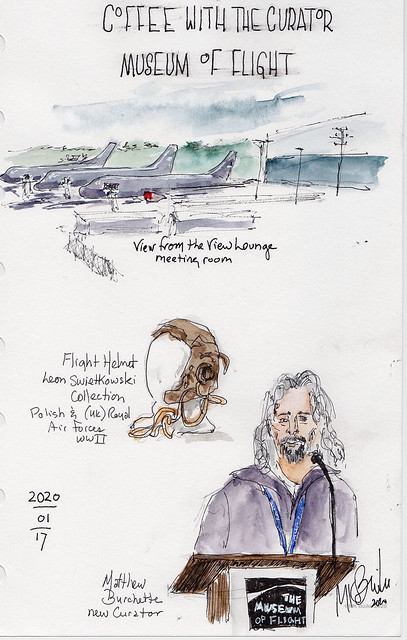 And since it would have been my 4th cup this morning, I didn’t have any coffee with the Curator!

Born in Michigan. Attended undergrad and graduate universities there. I've lived in England, Germany, Southern California and now Washington (state). I'm a retired Medical Social Worker with a past specialty in Oncology. I've enjoyed exploring historical re-creation through the SCA. I costume in several fandoms. Lately I've returned to Art and have taken up Urban Sketching, a version of en plein air painting.
View all posts by redharparts →
This entry was posted in Sketches, Urban Sketchers and tagged Boon Boona, ink and wash, Museum of Flight, pencil, Renton, Seattle, WA, watercolor. Bookmark the permalink.