Though I never want to deal the crowds on Memorial Day itself, for the past few years I have visited Tahoma National Cemetery in the days just prior.  I take flowers to put on grave sites without them and then I do one or two sketches while I think about the sacrifice represented there.

First, I stopped at some graves I’d visited before.  This time I knew to leave a penny as a token of visitation:

+ Medal of Honor Recipient Second Lieutenant Jesse T. Barrick (Civil War), 57th Regiment of the U.S. Colored Infantry, the only Civil War veteran buried there. (more about him and the effort to move his grave to a National Cemetery)

+ Sergeant First Class Nathan Ross Chapman — first American serviceman to die from hostile fire in the war in Afghanistan in 2002.   Sergeant Chapman was a communications specialist with the 1st Special Forces Group at Fort Lewis, Wash. I also left flowers as his grave had none.

But someone who knew him or had been in his unit obviously had visited, given the patch and the quarter left:

+ Andrew H. McConnell, whose grave I sketched in 2015 ( more info on him)  and then heard from his mother in 2016 when she saw my blog post with the sketch (see my comment recounting the interaction at the bottom of this blog post https://redharparts.wordpress.com/2015/05/24/memorial-day-2015/ )

There was also a quarter atop his headstone.

While looking for these graves, I left flowers randomly at the resting places of those KIA who had no flowers.  And I left a penny:

+ PV2 Michael Andrew Baloga  Info about him   and here

I went this morning before it became too hot but I still sweltered in the sun as I sketched.  I knew I wanted to attempt the wide scene as The Mountain would be out!  This VA cemetery is situated such that Mt. Rainier can be seen over the honored dead.  And it was today! 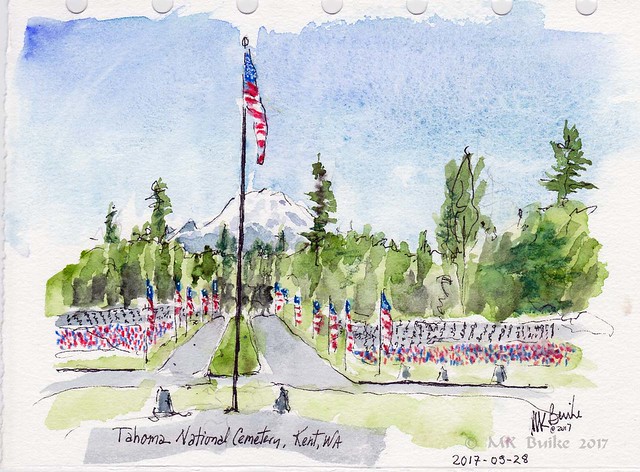 While sketching a couple people came up to look and talk.  One was Laurie, whose son is buried here.  She started Lion Heart Heroes Foundation.  A couple men also stopped.  Like me, they knew no one buried there but just thought it was the right thing to visit and pay respects.

After I got home, I also painted a journal page using photos of two columbarium marker. 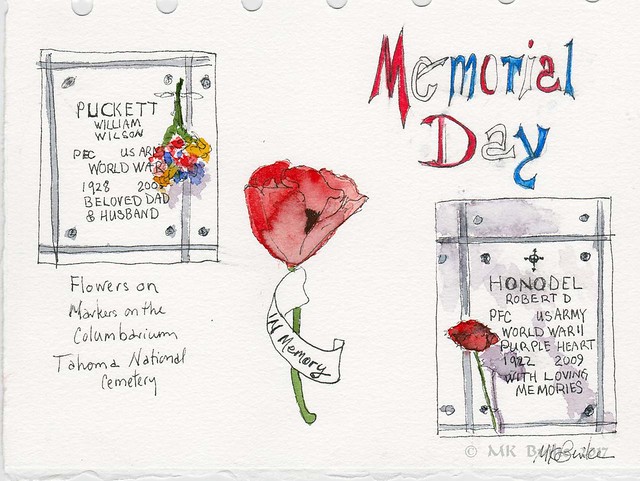 3 Responses to Lest we forget…..